Carbon 14 Production And The Solar Cycles

Referenced here is a peer reviewed article about the Maunder Minimum where it is noted that solar activity affects 14C production in the atmosphere. When cosmic rays strike earths atmosphere, 14N gets converted to 14C, which is unstable. The 14C atoms which join with O2 to form CO2 however maintain the 14C from reverting back into 14N. Being locked away in a molecule, it slowly decays over time to 12C, a more stable form of carbon.

Another thing similar in concept to the solar cycles affecting cosmic rays interacting with earths atmosphere is earths magnetic field. A stronger magnetic field would deflect more cosmic rays than a weaker one. Earths magnetic field, with a half-life of 1400 years is set to be depleted in less than 2,000 years. Therefore, it would have hindered the production of 14C in the past compared to the present.

What does this all mean? Simply that the production of 14C in earths atmosphere is not a constant and production in the past was likely less than what is observed today. We cannot assume that creatures, even a century ago, died with a 14C to 12C ratio similar to what is observed today and interpolate back in time to determine an assumed age. While it is often said that Carbon dating is good for objects no more than 50,000 - 70,000 years in age, it is in fact good only for objects that are 0 years of age.

Shown below is an image from Objective Ministries which is exactly like one of the Chinese word Dr. McIntosh mentions in his lecture on the DVD.

Noah, Shem, Ham, Japeth and their wives totaled eight people on board the Ark.

Another interesting thing to note is a book that he references titled Maps Of The Ancient Sea Kings which shows how ancient maps depicted the Antarctic shoreline when it is currently hidden underneath ice sheets. I'll post a review of that book at a later date.

Posted by Handini No comments:

Originally published in 1977, the book is currently available online at www.parentcompany.com.
Posted by Handini No comments: 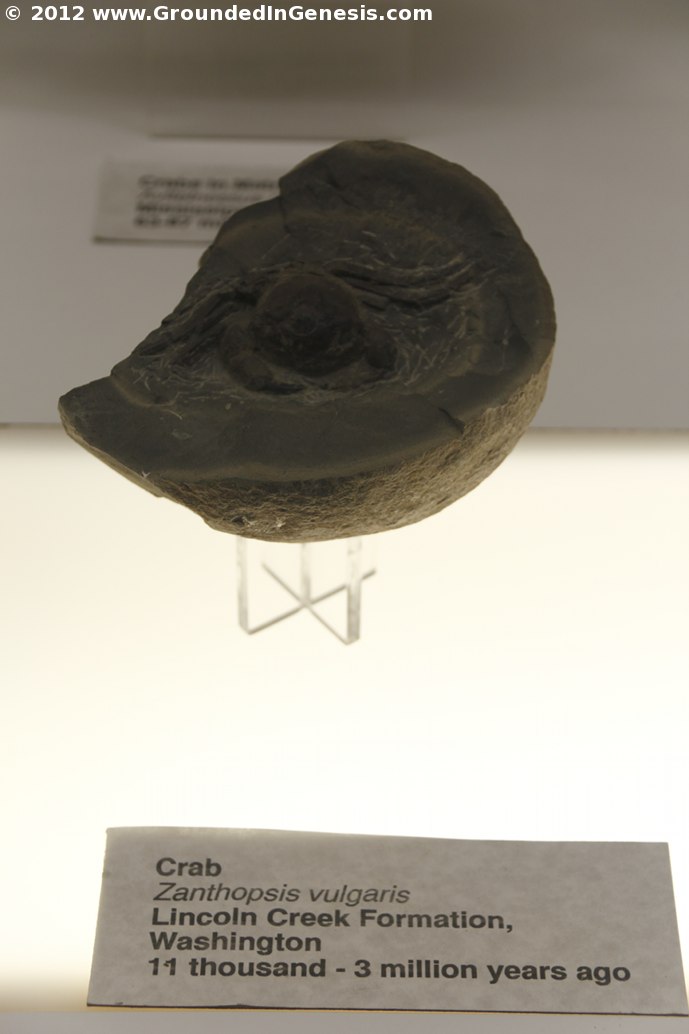 While the age range may at first appear odd, that's not what I find unusual about their age estimate. Sometimes a fossil may be estimated to be between 70 million years to 65 million years, for example. That doesn't sound as odd even though there is a wider difference in the age range (5 million years vs. under 3 million years). The odd thing about the age estimate provided, which is based upon uniformitarian presuppositions, is that the range extends across three different epochs, the Holocene, Pleistocene, and Paleocene (Source: http://www.dmns.org/main/minisites/fossil/whatfossil.html).
Moreover, the lower end of the range (11 thousand) is when the ice age ended according to uniformitarian theology. If an ice age is supposed to last a mere 100,000 years according to the Milankovich theory, then this fossil should have either an established uniformitarian age of 11 thousand to 100 thousand years or 100 thousand to 3 million years (or somewhere in between based on an established epoch for when the crab was alive). The evidence here proves how dating techniques based on an old earth viewpoint have issues and while uniformitarian endorsers act as though they have everything resolved, that is clearly not the case.

Employing the young earth creationist viewpoint on the other hand would date this fossil to be roughly 4,400 years old. This means that it would have been formed by a world wide flood during the days of Noah, and before the ice age which would have occurred in it's aftermath.
To give uniformitarians credit however, they did place the fossil age roughly before the ice age for most of their assumed age range.
Posted by Handini No comments:

Last month I went to the North Carolina Museum Of Natural Sciences in downtown Raleigh, NC. They had a beautiful hummingbird exhibit showing the diversity among hummingbirds and provided me with a little humor as well. 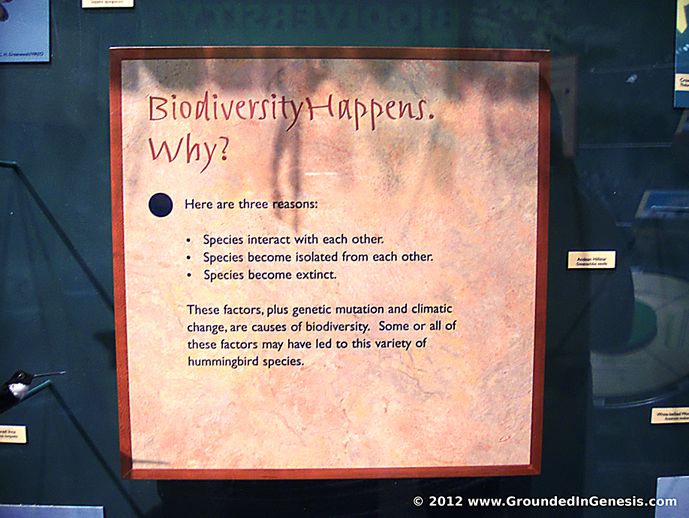 A random lady came to look at the exhibit and I told her: "Biodiversity happens because a species becomes extinct." and pointed to the plaque. She got a kick out of it and laughed quite well. The only reasoning I have that they would use to explain biodiversity by a species going extinct is if a new species develops and moves in to fill its ecological niche. This however does not add to biodiversity but rather replaces the traits from one species with those from another.

The other reasons provided also do not support the generation of biodiversity. A species interacting with each other simply means the rearrangement of genes and not the addition of new genes. A species becoming isolated from each other may generate a new species but reproductive isolation is the culprit along with genetic drift. These factors allow for speciation due to the fact that traits are removed from the gene pool. This results in less genetic diversity and can thus eliminate certain genes needed for the overall population to use to reproduce that only that population still recognizes.

Consequently, speciation would have occurred after the flood at a much higher rate that we see today because there would have been a greater genetic diversity in the parent population of each kind of animal than in the different daughter populations that have arisen through becoming isolated from one another as they spread across the earth.

The only one listed on there which implies biodiversity occurring is genetic mutation and that one has its own issues. One example are panthers. The Florida Panther is the name given to a population of Puma concolor which lives in the Southeastern United States. Through hunting and human population growth, they have become isolated to a few pockets of habitat in Florida. While they are the same species as other panthers such as cougars and mountain lions, as they are all different names for the same cat, they have slightly different traits. It is just like how a poodle and a dachshund are both dogs and the same species of dog at that.

Therefore the plaque shown in the above photograph is highly flawed. They should fire the person who derived it and hire me instead. Posted by Handini No comments:

Book Review: Tornado In A Junkyard

longer have the original copy I bought but rather, a more recent edition.
A condensed version of his book can be found on scribd, although the book is much better as it contains tons of references on what he wrote. The wealth of references he provides in each chapter is quite well balanced between creationist and evolutionist sources. Moreover he covers, various aspects regarding creation such as the flood stories found in various cultures as well as the level of accuracy as compared to the Genesis account. He also discusses creation dates from different ancient cultures and how they correlate to the creation date according to Biblical chronology.
This book also discusses how dinosaurs became extinct after the flood. Legends of knights slaying dragons to become heroes of their town is one of these reasons. Polonium halos are also discussed as well as the ice age. At the time I originally read this book there were a couple of questions that remained regarding the creationist perspective on the ice age that I eventually purchased and read the book An Ice Age Caused by the Genesis Flood by Michael Oard.
In addition to scientific refutations to evolution, he discusses how the concept of evolution reduces the value of human life in the minds of men–giving rise to events like the Holocaust. Hitlers quest to purify the German nation for the "Master Race" was inspired by his evolutionary beliefs. It is kind of ironic however because the Arian race is not really blond hair and blue eyed folks but rather, the Iranians. Persia was renamed Iran, meaning "Land of the Arians".
In the chapter titled: "Trial By Hollywood" Perloff discusses how peoples views tend to get swayed by fiction versus factual information and uses the example of the movie: Inherit The Wind which depicts the Scopes Monkey Trials although misrepresents a lot of facts concerning the trial. I lost respect for Harry Morgan after finding out that he is in that 1960 movie.
All in all, this book is highly recommended to anyone interested in the topic as it does an excellent job presenting the topic of creation as well as arguing for it.
Posted by Handini No comments:

Another excellent trait about this book is that it provides a list of ages based on the influx of various elements from rivers into oceans. This dating technique was first suggested by Edmund Halley. Other dating methods are also mentioned such as the rate of the earth's magnetic field decay or the influx of particles from space to the earth.

This book not only presents the differences between uniformitarianism and catastrophism. In the chapter concerning a Biblical interpretation of creation, Morris also presents concepts such as Progressive Creation, Theistic Evolution, the Day-Age Theory, the Gap Theory, and the Framework Hypothesis, along with why they are incompatible with scripture.

Overall, while this is an earlier book on the subject of creation it is still an excellent resource and is highly recommended for anyone to read.
Posted by Handini No comments:

I was fortunate that as a master's student in graduate school I had professors that did not hesitate to present two sides of a coin. My advisor did not only have us watch the movie An Inconvenient Truth but also had us watch a lecture by Richard Lindzen from MIT who disagrees with Al Gore's perspective on the concept of global warming. Another professor presented my class with papers promoting one theory with relation to what drives convection in tropical cyclones, along with papers presenting an opposing view.
Opposition in science is generally frowned on by those who embrace the prevailing view. Nevertheless, it is imperative that opposition to the prevailing view arises in order for the prevailing view to be either substantiated or rejected. Recently the evolutionary idea that birds descended from dinosaurs has been challenged. Unfortunately to students, they are usually not taught that the idea of birds being descended from dinosaurs is just a hypothesis that has become the prevailing view, is still subject to the scrutiny of future findings, and is not an established scientific fact. By doing so professors are promoting their religion with relation to a subject rather than presenting their view along with opposing views and to logically attempt to justify their views to the class.
So many people become swayed to embrace the concepts of evolution and uniformitarianism because they are not encouraged to think critically on an issue. It is therefore imperative for one to understand what it is they believe and why they believe what they do and not to just believe a view because that is the view they were taught. If they merely accept what they were initially taught as fact, without any justification for what they were initially taught, then they will easily be swayed when another view is presented which appears to have the answers.
Posted by Handini No comments: